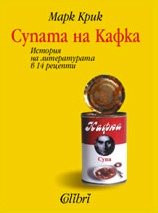 London-based photographer Crick's whimsical book consists of pastiches of famous writers having culinary adventures. John Steinbeck's Depression-era risotto is a parched affair: "The porcini lay dry and wrinkled, each slice twisted by thirst." The Marquis de Sade's heroine Justine offers a through-the-keyhole account of her captor's preparation of Boned, Stuffed Poussins: "I had no idea that a small bird could take so much stuffing, but he carried on, using language that my ears could barely suffer, until the poor bird could take no more." Crick easily evokes the serene wisdom of Jane Austen, in a recipe for Tarragon Eggs: "It is a truth universally acknowledged that eggs, kept for too long, go off." From Raymond Chandler's edgy account of cooking lamb to Gabriel García Márquez's epic Coq au Vin, from Harold Pinter's one-act Cheese on Toast to Chaucer's versified instructions for Onion Tart, Crick ranges easily throughout world literature, perfectly capturing the voice of each writer. Not content with this capricious achievement, Crick supplies his own color illustrations, likewise works of pastiche, gently mocking, among others, Andy Warhol, William Hogarth, Jean Cocteau, Vincent van Gogh and Henry Moore. This is a delight for literary foodies.

Marc Crick (1962) is a British photographer and author, best known for his literary parodies “Kafka's Soup” - a complete history of world literature in fourteen recipes.