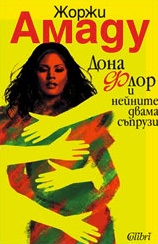 Dona Flor and Her Two Husbands

Dona Flor e Seus Dois Maridos (Dona Flor and Her Two Husbands) is a Brazilian Modernist novel, written by Jorge Amado in 1966. If Charles Dickens had been Brazilian, then he might have written Dona Flor — the Dickens of The Pickwick Papers rather than Bleak House. Amado's lovingly imagined tale of an extraordinary woman's unlikely path to happiness has been read and enjoyed by generations of readers, and with good reason. It is a vast panorama of life in the town of Salvador, Bahia, with dozens of classic characters and a circuitous plot, all delivered with humour and panache. A hedonist's delight, Dona Flor is a celebration of love, sex, food, music, gambling and everything else that can make a person happy.

The novel has been adapted into a 1976 film.