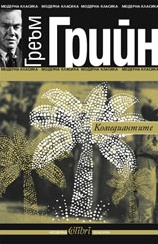 The Comedians is a novel by Graham Greene, first published in 1966. It depicts life in Haiti under the rule of François "Papa Doc" Duvalier and his secret police, the Tonton Macoute. The setting for much of the novel, the Hotel Trianon, was inspired by the Hotel Oloffson in central Port-au-Prince.

The novel was made into a motion picture in 1967 with Richard Burton, Elizabeth Taylor, Alec Guinness, Peter Ustinov, James Earl Jones, Cicely Tyson, and Lillian Gish.