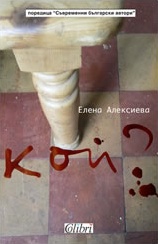 What happens with a man when the divine materializes and grabs him? Is it so simple to handle your own doubts? Is it so unforgivable to have them? Which is worse – to have or not to have them? If one cannot survive without God, then how can one survive with Him? Nine almost biblical stories which ask the questions. But whose questions are these? And who is the one behind all that?