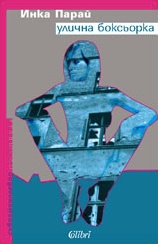 Inka Parei's novel is set in the dark recesses of a unifying Berlin. The narrator lives in an almost completely abandoned, dilapidated apartment building. The last remaining neighbour, a woman named Dunkel ("dark"), disappears; the narrator, named Hell ("bright" or "light") tries to find out what happened to her.

Berlin is in flux: the Wall came down and the city is being rebuilt and redefined. Only Hell's world seems static, unchanging. Something horrible happened to her, leading to her almost complete withdrawal from society. She continues to live in almost complete isolation in an abandoned building that even most of the other squatters living there illegally have fled from. She knows practically nothing even about her closest neighbour, Dunkel.

The narrative shifts back and forth between present and past, revealing more about the defining act that was perpetrated against Hell as it progresses. She took up martial arts, which becomes an anchor in her life (and allowed her to be of help to the owner of the local cafe-restaurant, making for one of the few places where she finds some welcome). With the disappearance of Dunkel more turmoil enters her life, specifically in the form of März, a young man with a backpack full of cash who is looking for his father. An uneasy relationship forms between Hell and him, complicated further by the fact that März is also looking for a friend who is clearly the person who had previously devastatingly attacked Hell.

This last coincidence is, of course, one coincidence too many, but Parei does a decent job of tying together the threads of the tale and bringing it to a fairly satisfactory resolution. However, the true success of the book is in Parei's convincing and haunting tone. These decayed and forgotten back alleys and people, this lifestyle completely outside of the mainstream, are all brought beautifully and simply to life. There is nothing overwritten here: Parei sketches her scenes and lets them speak for themselves, a powerful and effective device in the hands of one in such command of her writing.

Inka Parei (born in 1967 in Frankfurt) is a German writer who lives in Berlin. She studied sociology, political science, sinology and German studies. Parei won the 2003 Ingeborg Bachmann Prize for excerpts from her book Was Dunkelheit war.