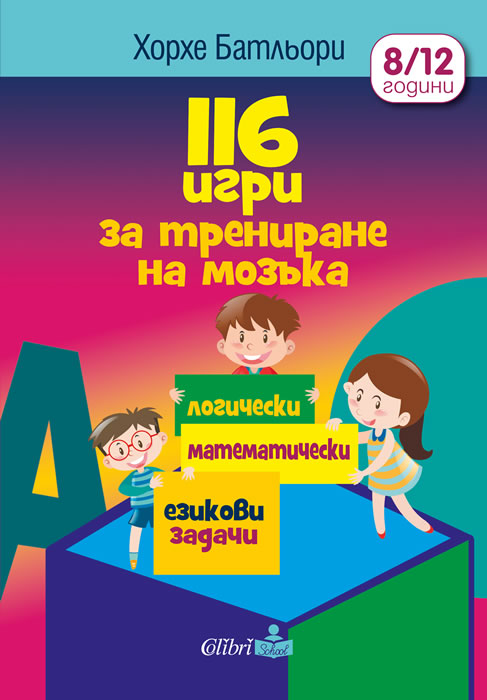 The book contains a variety of logical, mathematical and linguistic tasks suitable for children aged between 8 and 12 years. Here are some of the types of tasks:

- analogies: tasks used in intelligence tests, in which a series of elements with an unknown last part is presented, which must be chosen from several pre-given solutions, following the given logic scheme;

- construction of figures from pre-set parts, which must be arranged in an appropriate way;

- drawing figures that must meet certain conditions; occupy a limited delineated space or include a series of points;

- "magic squares" of numbers that have the same sum in each row, column and diagonal and other similar relationships;

- deciphering ciphers in which numbers are represented by letters;

- "escapes" of vowels and consonants, ie. expressions in which the missing letters must be supplemented so that the phrases make sense; crossword puzzles and other linguistic games;

- arithmetic problems in which a certain number must be reached using other numbers and appropriate operations are applied;

- logical tasks in which the conclusion is based on an assumption, but to reach it is sometimes not easy, because either the data is too much, or there is some trick.

At the end of the book are answers and variants of the tasks.

Jorge Batllori is a Doctor of Geology at the University of Barcelona, holds a Master’s degree in Engineering and Environmental Management and is an Environment Teacher. He has given courses for directors and leisure supervisors and has participated in a variety of seminars about the importance of play and its educative possibilities, a topic to which several of his publications are dedicated. He has collaborated with Catalunya Ràdio on El Suplement, a programme which attracts a large number of listeners, where he presented his Jocs Mentals.