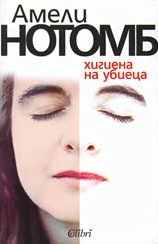 Hygiene and the Assassin

An eighty-three year old Nobel prize winner author of twenty-two novels is found passed out at his home. Two months before his death of a rare cartilage cancer journalists from all over the world came to interview the viscious fat old man, loathing the women and the humanity. Four of the five journalist allowed to meet him were thrown away. But it is the fifth one who is going to reveal his great secret hidden in his books one of which - uncompleted - is entitled Hygiene and the Assassin.