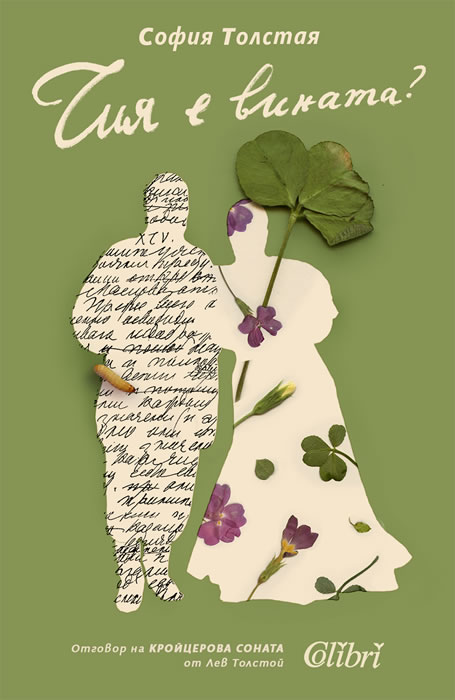 This is the first Bulgarian translation of Sophia Tolstoy's short story, "Who's to Blame?", published in Russia in 1994. Sophia had written the story almost one hundred years earlier to rebut her husband Leo's cynical views about love and marriage, including male sexuality, adultery, and jealousy, expressed in his novel published in 1888, "The Kreutzer Sonata".

Sophia Andreyevna Tolstaya was the wife of Russian novelist and thinker Leo Tolstoy. Sophia was one of 3 daughters of physician Andrey Behrs, and Liubov Alexandrovna Behrs. Sophia was first introduced to Leo Tolstoy in 1862, when she was 18 years old. At 34, Tolstoy was 16 years her senior. On 17 September, 1862 the couple became formally engaged, marrying a week later in Moscow. At the time of their marriage, Leo Tolstoy was already well-known as a novelist after the publication of The Cossacks.

On the eve of their marriage, Tolstoy gave Sophia his diaries detailing his sexual relations with female serfs. In Anna Karenina, 34 year old Constantine Levin, a semi-autobiographical character behaves similarly, asking his 19 year old fiancée Kitty to read his diaries and learn of his past transgressions.

The Tolstoys had 13 children, only 8 of which survived childhood. Tolstaya tried to convince her husband to use birth control but he refused. Fortunately, the family was prosperous, owing to Tolstoy's efficient management of his estates and to the sales of his works, making it possible to provide adequately for the increasing family.

Tolstoya was a devoted help to her husband in his literary work. She acted as copyist of War and Peace, copying the manuscript seven times from beginning to end. In 1887, Tolstoya took up the relatively new art of photography. She took over a thousand photographs that documented her life, including with Tolstoy, and the decline of pre-Soviet Tsarist Russia. She was also a diarist and documented her life with Leo Tolstoy in a series of diaries which have been published in English translation.

After many years of an increasingly troubled marriage - the couple argued over Tolstoy's desire to give away all his private property - Leo left Sophia abruptly in 1910, aged 81, with his doctor, Duchan Makovicki, and daughter Alexandra Tolstaya. Tolstoy died 10 days later in a railway station, whilst Sophia was kept away from him. Following the death of her husband, Sophia continued to live in Yasnaya Polyana and survived the Russian Revolution in relative peace.