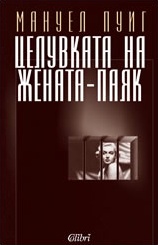 The Kiss of the Spider-Woman

Novel by Manuel Puig, published in 1976 as El beso de la mujer arana. Mostly consisting of dialogue between two men in an Argentine jail cell, the novel traces the development of their unlikely friendship. Molina is a middle-aged homosexual who passes the long hours in prison by acting out scenes from his favorite movies. Valentin is a young socialist revolutionary, who initially berates Molina for his effeminacy and his lack of political conviction. Sharing the hardships of a six-month prison term, the two eventually forge a strong relationship that becomes sexual. In an ironic role reversal at the end of the novel, Molina dies as a result of his involvement in politics while Valentin escapes the pain of torture by retreating into a dream world.

Manuel Puig was born in General Villegas (in Buenos Aires province). After graduating from Universidad de Buenos Aires with a degree in philosophy, he began working as a film archivist and editor in Buenos Aires, then in Italy. In the 1960s he moved back to Buenos Aires, where he penned his first major novel, "La Traicion de Rita Hayworth". Being of leftist tendencies, and seeing an oncoming rightist wave in Latin America, Puig moved to New York, where he wrote his later works (including "El beso de la mujer araña"). Puig lived in exile throughout most of his life. In 1989 Puig moved to Cuernavaca (Mexico), where he died in 1990.

Much of Puig's work can be seen as pop art. Perhaps due to his work in film and television industry, Puig managed to create a writing style that incorporated elements of cinema and television, such as montage. He also made much use of low culture in his works, soap opera for example.