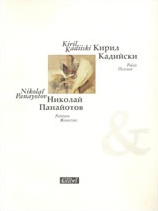 Nicolay Panayotov believes in arts that can cooperate with one another. That's why he cooperates with Kiril Kadiiski.

Kiril Kadyiski (1947) is a Bulgarian poet, essayist, translator, and an author of many books, including “Concerts in Heaven” (1979), “Rider Of Marble Horses” (1983), “Time of Sand” (1987), “Poems” (1995), “The Death of the White Swallow” (2001), “Green” (2002). He has translated from French the authors: Mallarme, Villon, Baudelaire, Verlaine, Rimbaud, Apollinaire, and from Russian: Tyutchev, Bunin, Block, Voloshin, Pasternak. Kadyidski is also the author of the only book with palindromes in the Bulgarian literature and of the poetry anthology “From Villon to Vian”.

The books of Kiril Kadyiski have been issued in France (nine books of poetry), Spain, Greece, Serbia, and Romania. His poems have been translated into English, German, Italian, Polish, Slovak, Hungarian, Russian, Belarusian, Ukrainian, Turkish and Macedonian.