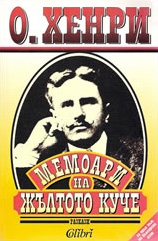 Memoirs of a Yellow Dog

The book “Memoirs of a Yellow Dog. Short Stories” contains the following O. Henry's short stories: “The red street”, “A Cosmopolite In A Cafe”, “The Furnished Room”, “Between Rounds”, “Memoirs Of A Yellow Dog”, “The Mammon And The Archer”, “Friend Telemachus”, “The Making Of A New Yorker”, “A Harlem Tragedy”, “Conscience In Art”, “The Man Higher Up”, “A Tempered Wind”, “The Day Resurgent”, “The Fifth Wheel”, “The Poet And The Peasant” and others.

O. Henry (1862-1910) was originally born William Sydney Porter in Greensboro, North Carolina. As a young man, he moved to Austin, Texas where he worked as a bank teller. He moved again to Houston, Texas in 1895 and became a newspaper columnist. In 1896, however, he was called back to Austin, where he was accused of embezzling money from the bank where he had worked. In order to evade prison, O. Henry fled to Honduras, and stayed there for six months before returning to the United States. Upon his return, the court tried him and put him in an Ohio prison for three years. While in prison, he began writing short stories and it was there where he took the pen-name O. Henry for his writings. After his release from prison in 1901, he moved to New York, which is the setting for many of his stories. He is the author of over 250 stories and is most famous for his use of surprise or twist endings. Notice the twists and surprises in the endings to "The Last Leaf", "The Green Door", and perhaps his most famous story, "The Gift of the Magi".