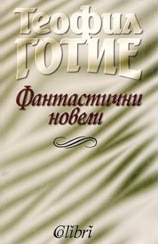 Tales of the Fantastic

“Tales of the Fantastic” contains some of the short novels of the famous French poet, dramatist, novelist, journalist, and literary critic Théophile Gautier. Through this book the readers will take delight in the texts of a brilliant stylist and a sorcerer of the words.

Prominent supporter of Romanticism, he was considered one of the predecessors of many subsequent literary traditions such as Parnassianism, Symbolism, Decadence and Modernism. In fact, Theophile Gautier was the founder of the literary movement of the Parnassians, based on his doctrine of “Art for Art's Sake”.

Charles Baudelaire dedicated to Gautier his “The Flowers of Evil” with the motto "The perfect poet", “Unimpeachable magician”.