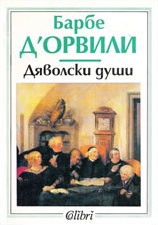 “The She-Devils” is the undeniable masterpiece of the famous for his dandy life French novelist and short-story writer Jules Barbey d'Aurevilly. The book contains six, imbued with a black romanticism, Baroque stories. Each story features a woman who commits an act of violence, or revenge, or some other crime. Each of them, in her own way, is obsessed with violent passions which make her personal world unusual and cruel.

The short-story collection was published in France in 1874 and it caused up an uproar with the French public and it was declared as a danger to public morality. “The She-Devils” has been banned on the grounds of blasphemy and obscenity. D'Aurevilly defended the work by saying that he himself was a Christian and the stories demonstrated the battle of good against evil.

“Colibri” Publishers offers to its readers the first translation of this provocative book.

Categories
World Classics
About the Author

Jules Amédée Barbey d'Aurevilly (1808–1889) was a French writer and critic. An aristocrat and monarchist, he supported himself by journalism; his output of critical and polemical articles was enormous. He favored Balzac, early admired Baudelaire, and harshly criticized naturalism. His novels and stories, set in his native Cotentin, are notable portrayals of provincial life and tragic struggle. Perhaps best remembered is "Les Diaboliques" (1874), hallucinatory tales with a satanic motif.