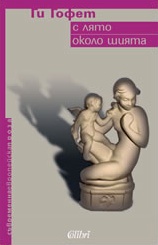 Summer around Your Neck

Summer around Your Neck (2001) is the shocking story of a 12-year old boy who falls in love with a woman 30 years his senior. The book is based on facts from the author’s own childhood and provides a rare insight into the sexual maturing of a young boy and devastating effects on his future. The book has been translated into many languages.

Guy Goffette is a poet and a Belgian Walloon writer born on April 18th, 1947 in Jamoigne (Ardennes). He was teacher, curator, editor, printer, librarian, translator and publisher of the notebooks of poetry "Triangle" and "Apprentypographe". He went through number of countries of Europe before putting down his suitcases to Paris where he lives nowadays. He works as a reader for Gallimar Publishers where most of his workes have been edited.

He is the author of 15 books of fiction and poetry and in 1989 was awarded the Mallarme Prize. A poet, even though he writes in prose, he published about fifteen books and acquired in 2001 the Grand prix of Poem of the French Academy for his entire work.