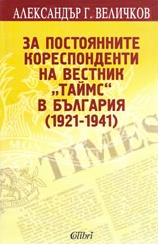 This monograph directs attention to unexplored until now aspects of a guiding policy of the “Times” newspaper - in the selection and assignation of tasks to its permanent correspondents in Sofia from 1921 to 1930, consistent with the strategic interests and targets of the Foreign Office in Bulgaria.

Alexander Velichkov (1945) is a Senior Research Associate at the Institute of History at the Bulgarian Academy of Sciences. For many years he has been working on various problems of the Bulgarian-American and Bulgarian-British cultural relations between the Two World Wars.