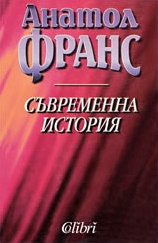 A Chronicle of Our Own Times

Anatole France is the first one to introduce to the French literature the character of the intellectual bibliophile. In the tetralogy A Chronicle of Our Own Time this character is situated in the contemporary Third Republic which is a rough period of the French history.

The protagonist - a professor in Classical philology is the thread that connects the four novels: The Elm-Tree on the Mall, The Wicker Woman, The Amethyst Ring, Monsieur Bergeret in Paris). Even though it was written a hundred years ago the stories are still a masterpiece of analytical psychology in the area of the fictional writing.

Anatole France studied at the Collège Stanislaus and after graduation he helped his father by working at his bookstore. After several years he secured the position of a cataloguer at Bacheline-Deflorenne and at Lemerre, and in 1876 he was appointed a librarian for the French Senate.

Ironic, skeptical, he was considered by his contemporaries the ideal French man of letters. He was elected to the French Academy in 1896 and was awarded the Nobel Prize for Literature in 1921. Anatole France became known after the publication of "Le crime de Sylvestre Bonnard" (1881) where he looked back at the 18th century as a golden age. Its protagonist, skeptical old scholar Sylvester Bonnard, embodied France's own personality. The novel was praised for its elegant prose and won him a prize from the French Academy. In "La rotisserie de la Reine Pedauque" (1893) Anatole France ridiculed belief in the occult; and in "Les opinions de Jerome Coignard" (1893), France captures the atmosphere of the fin-de-siecle. Among France's later works is the "L'Île des Pingouins" (1908) where France satirizes the human nature by transforming penguins into humans - after the animals have been baptized in error by the nearsighted Abbot Mael. Anatole France's most profound novel is "La Revolte des Anges"(1914) where Arcade, the guardian angel of Maurice d'Esparvieu, falls in love, joins the revolutionary movement of angels, and toward the end he realizes that the overthrow of God is meaningless unless in ourselves and in ourselves alone we attack and destroy Ialdabaoth. In the 1920s France's writings were put on the index of "Libri prohibiti".