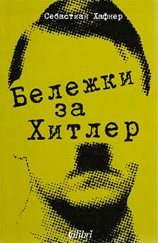 The "Frankfurter Allgemeine Zeitung" defines the book as: “...a stimulating, full of ideas, stylistic masterpiece of the historical studies”.

“Notes about Hitler” had 27 reissues in Germany and for months headed the list of bestsellers. The book has been awarded with the “Heinrich Heine" prize as “a considerable contribution to the understanding of the recent German history”.

Sebastian Haffner (December 27, 1907, Berlin – January 2, 1999, pseudonym for Raimund Pretzel) was a German journalist and author. He wrote mainly about recent German history. In 1938 he emigrated from Nazi Germany with his Jewish fiancée to London, where he intended to work as an author and journalist. He adopted the pseudonym Sebastian Haffner so that his family, who remained in Germany, would not be endangered by his writing. The name he took from the title of Mozart's "Haffner Symphony" and later he used the signature of this piece (KV 385) on his Vehicle registration plate.

Under the auspices of his mentor, David Astor, Haffner wrote for the London Sunday newspaper, The Observer, and became its editor-in-chief. However, because of differences between Astor, who had become the newspaper's publisher, and the London editorship regarding a divided Germany, he became the German correspondent in Berlin in 1954, a position which he kept until the building of the Berlin Wall.

Then he was writing for a German newspaper, Die Welt, until 1962, and from then until 1975 he was a columnist for the "Stern" magazine. Haffner is considered as one of the most successful German authors on the history of the 19th and 20th century written for a broad, nonacademic audience. He wrote most of his works in German, some of which have been translated into English.