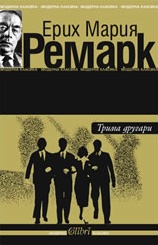 The year is 1928. On the outskirts of a large German city, three young men are earning a thin and precarious living. Fully armed young storm troopers swagger in the streets. Restlessness, poverty, and violence are everywhere. For these three, friendship is the only refuge from the chaos around them. Then the youngest of them falls in love, and brings into the group a young woman who will become a comrade as well, as they are all tested in ways they can never have imagined...

Written with the same overwhelming simplicity and directness that made All Quiet on the Western Front a classic, Three Comrades portrays the greatness of the human spirit, manifested through characters who must find the inner resources to live in a world they did not make, but must endure.

Erich Maria Remarque (June 22, 1898 – September 25, 1970) was the pseudonym of Erich Paul Remark. He was born in Osnabrück (Germany) into a working-class Roman Catholic family. At the age of eighteen he enlisted as a soldier to the front lines of World War I, where he was wounded by stray shell fragments. After the war he changed his last name to Remarque, which had been the family-name of his grandmother. He worked at a number of different jobs, including librarian, businessman, teacher, journalist and editor.

In 1929, Remarque published his most famous work, "All Quiet on the Western Front" ("Im Westen nichts Neues") under the name Erich Maria Remarque (changing his middle name in honor of his mother), the novel described the utter cruelty of the war from the perspective of a nineteen-year-old soldier. A number of similar works followed; in simple, emotive language they realistically described wartime and the postwar years.

In 1933, the Nazis banned and burned Remarque's works, and issued propaganda stating that he was a descendant of French Jews and that his real last name was Kramer, his original name spelled backwards. This is still listed in some biographies despite the complete lack of proof. He had been living in Switzerland since 1931, and in 1939 he emigrated to the United States of America with his first wife, Ilsa Jeanne Zamboui, whom he married and divorced twice, and they became naturalized citizens of the United States in 1947. He married the Hollywood actress Paulette Goddard in 1958 and they remained married until his death in 1970.