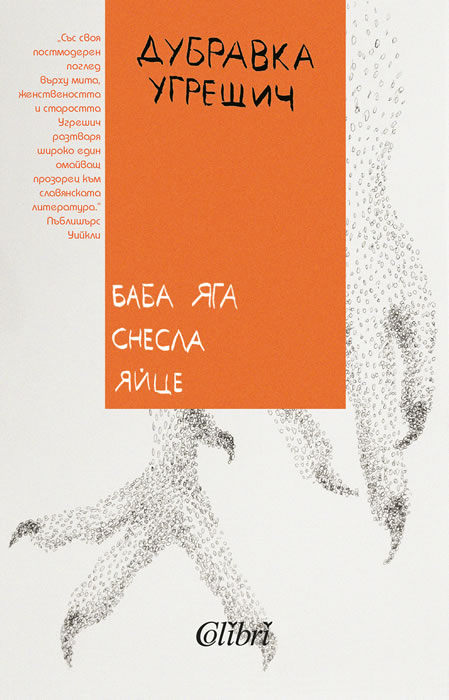 According to Slavic myth, Baba Yaga is a witch who lives in a house built on chicken legs and kidnaps small children. In Baba Yaga Laid an Egg, internationally acclaimed writer Dubravka Ugresic takes the timeless legend and spins it into a fresh and distinctly modern tale of femininity, aging, identity, and love.

With barbed wisdom and razor-sharp wit, Ugresic weaves together the stories of four women in contemporary Eastern Europe: a writer who grants her dying mother’s final wish by traveling to her hometown in Bulgaria, an elderly woman who wakes up every day hoping to die, a buxom blonde hospital worker who’s given up on love, and a serial widow who harbors a secret talent for writing. Through the women’s fears and desires, and their struggles against invisibility, Ugresic presents a brilliantly postmodern retelling of an ancient myth that is infused with humanity and the joy of storytelling.

Dubravka Ugrešić earned her degrees in Comparative Literature, Russian Language and Literature at the University of Zagreb, and worked for twenty years at the Institute for Theory of Literature at Zagreb University, successfully pursuing parallel careers as a writer and a literary scholar.

She started writing professionally with screenplays for children’s television programs, as an undergraduate. In 1971 she published her first book for children Mali plamen, which was awarded a prestigious Croatian literary prize for children’s literature. Soon she gave up writing for children.

As a literary scholar Dubravka Ugrešić was particularly interested in Russian avant-garde culture. She is best known in the former Yugoslavia for her fiction, novels and short stories: Poza za prozu, 1978; Stefica Cvek u raljama zivota, 1981; Zivot je bajka, 1983; Forsiranje romana reke, 1988. Her novel Forsiranje romana reke was given the coveted NIN-award for the best novel of the year: Ugrešić was the first woman to receive this honor. Croatian film director Rajko Grlic made a film U raljama zivota (1984) based on Ugrešić’s short novel Stefica Cvek u raljama zivota. Ugrešić co-authored the screenplay, as she did with screenplays for two other movies and a TV drama.

In 1991, when the war broke out in the former Yugoslavia, Ugrešić took a firm anti-nationalistic stand and consequently an anti-war stand. She started to write critically about nationalism (both Croatian and Serbian), the stupidity and criminality of war, and soon became a target of the nationalistically charged media, officials, politicians, fellow writers and anonymous citizens. She was proclaimed a “traitor”, a “public enemy” and a “witch”, ostracized and exposed to harsh and persistent media harassment. She left Croatia in 1993.

Dubravka Ugrešić has received several major European literary awards. In 2016, Ugrešić won the Neustadt International Prize for Literature. She is based in Amsterdam today, working as a freelance writer.