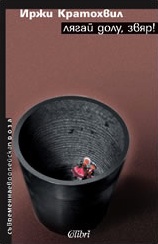 Lehni, bestie! (Lie Down, Beast! 2002) was inspired by the events of September 11th. The beast of the title is not Bin Laden or Islamic fundamentalism; it is a kind of an analogy for other forms of evil and violence, set in a horror-like story that is set in 1950’s Czechoslovakia. Although this story is a fiction, it is extremely convincing and up-to-date.

Jiří Kratochvil started publishing his works as early as the late 1960’s, but for the next twenty years, he appeared in Samizdat only, as he was not allowed to publish officially. After the fall of the communist regime, he soon became one of the most translated contemporary Czech authors. Kratochvil is a leading figure in contemporary post-modernist Czech literature.