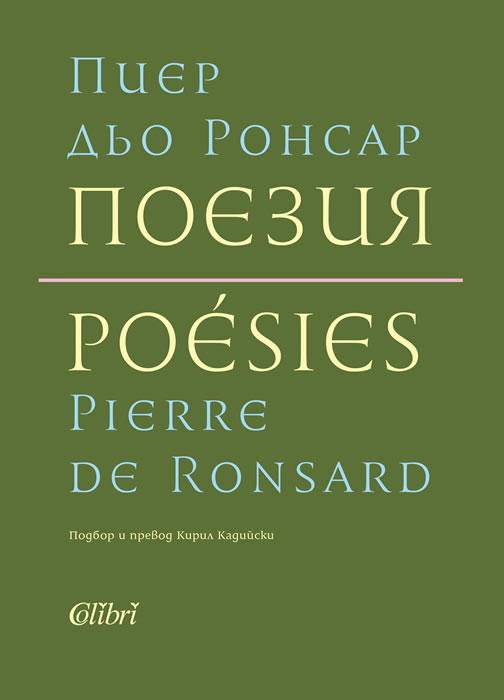 Pierre de Ronsard owes his everlasting glory mostly to the collections "Odes" and "Poems of Love", inspired by his beloved Cassandre, Marie and Helene, to whom he dedicates immortal sonnets. This significant part of his work is also the most valuable and has the greatest chances to affect the modern reader. This is probably why Kiril Kadiiski, a compiler and translator of this collection, had selected the works in it.

Translations of individual poems from these collections can be found in various anthologies, but this is the first representative bilingual edition of Ronsard''s poetry in Bulgarian.

Categories
ClassicsPoetry
About the Author

Pierre de Ronsard (11 September 1524 – 27 December 1585) was a French poet or, as his own generation in France called him, a "prince of poets". His popularity in his own time was overwhelming and immediate, and his prosperity was unbroken.

The character and fortunes of Ronsard's works are among the most remarkable in literary history, and supply in themselves a kind of illustration of the progress of French literature during the last three centuries. It was long his fortune to be almost always extravagantly admired or violently attacked. At first, as has been said, the enmity, not altogether unprovoked, of the friends and followers of Marot fell to his lot, then the still fiercer antagonism of the Huguenot faction, who, happening to possess a poet of great merit in Du Bartas, were able to attack Ronsard in his tenderest point. But fate had by no means done its worst with him in his lifetime. After his death the classical reaction set in under the auspices of Malherbe, who seems to have been animated with a sort of personal hatred of Ronsard, though it is not clear that they ever met. After Malherbe, the rising glory of Corneille and his contemporaries obscured the tentative and unequal work of the Pléiade, which was, moreover, directly attacked by Boileau himself, the dictator of French criticism in the last half of the 17th century.

Then Ronsard was, except by a few men of taste, such as Jean de La Bruyère and Fénelon, forgotten when he was not sneered at. In this condition he remained during the whole 18th century and the first quarter of the 19th. The Romantic revival, seeing in him a victim of its special bête noire Boileau, and attracted by his splendid diction, rich metrical faculty, and combination of classical and medieval peculiarities, adopted his name as a kind of battle-cry, and for the moment exaggerated his merits somewhat. The critical work of Sainte-Beuve in his Tableau de la littérature francaise au 16ème siècle, and later of other authors, has established Ronsard's reputation.

Ronsard was the acknowledged chief of the Pléiade and its most voluminous poet. He was probably also its best, though a few isolated pieces of Belleau excel him in airy lightness of touch. Several sonnets of Du Bellay exhibit the melancholy of the Renaissance more perfectly than anything of his, and the finest passages of the Tragiques and the Divine Sep'Maine surpass his work in command of the alexandrine and in power of turning it to the purposes of satirical invective and descriptive narration. But that work is very extensive (we possess at a rough guess not much short of a hundred thousand lines of his), and it is extraordinarily varied in form. He did not introduce the sonnet into France, but he practised it soon after its introduction and with skill - the famous "Quand vous serez bien vieille" being one of the acknowledged gems of French literature. Rose cultivar 'Pierre de Ronsard', named in reference to Ronsard's poem Ode à Cassandre (Mignonne, allons voir si la rose...)

His many odes are interesting, and at best are fine compositions. He began by imitating the strophic arrangement of the ancients, but very soon had the wisdom to desert this for a kind of adjustment of the Horatian ode to rhyme, instead of exact quantitative metre. In this latter kind he devised some exquisitely melodious rhythms of which, till our own day, the secret died with the 17th century.