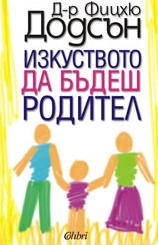 Dodson covers infancy, toddlerhood, "first adolescence", and preschool stages in addition to special parenting situations and health care. Virtually no pertinent topic is left out, and the breezy style filled with anecdotes about their own children makes this a pleasure to read. Helpful appendixes list recommendations for toys, records, and books.

Dr Fitzhugh Dodson (1923—1993) is a world-famous psychologist, lecturer and writer. He began his career as a priest, before to devote fully to children, their nurture, education and treatment. A father of three children, a practicing child psychiatrist, owner and manager of a school for children in California, a member of more than ten scholarly associations, he popularizes his experience in books like "The Art of Being a Parent”, “The Art of Being a Father”, "Everything Depends on the First Six Years”, “How to Habituate Our Children to Discipline” and many others, issued in several millions of copies world-wide and became reference books for many generations of parents.

How to Talk about Death
Françoise Dolto

The Rose-tinted Spectacles of the Soul
Lubomir Rosenstein

Psychology of the Subconscious
Sigmund Freud