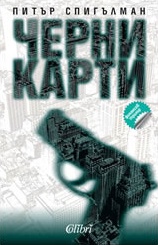 After a lengthy, but never boring, setup, Spiegelman's first novel pitches from one taut, suspenseful scene to another, with New York PI John March at the center but also including an impressive cast of allies, adversaries and interlopers. The author lays out the collapse of financial giant MWB (Merchant's Worldwide Bank) and the subsequent federal investigations in detail. March's friend, lawyer Michael Metz, hires him to help a client, an officer at a major investment bank. It appears that fallout from MWB's collapse has prompted a blackmailer to use information seemingly derived from MWB documents to threaten Metz's client with exposure that would ruin his career. Real or manufactured, this data would be damaging. March must be careful, of course, not to step on federal toes. From computers to shoe leather, March's dogged search is entertaining, plausible and ultimately dangerous. Nothing about this stylish, literate mystery reads like a debut, as Spiegelman handles the complex plot with verve and artfully sets the stage for a backstory with mere hints about the trauma that drove March from upstate cop to PI. John March is one of the most intriguing new PIs to come along in quite some time, and if this strong first outing is any indication, he should be in for a long and enjoyable run.

Peter Spiegelman is a veteran of over twenty years in the financial services and software industries, and has worked with leading banks, brokerages and central banks around the world. In the mid-1990's, Peter left his position as a Vice President at a major Wall Street firm to become a partner in a banking software company. The company's product soon became a leader in its marketplace, and in the late-1990's Peter and his partners sold their business to a larger firm. Peter retired from the software industry in 2001, to write. His debut novel, "Black Maps", was published by Knopf in August, 2003 and won the 2004 Shamus Award for Best First Novel.

Peter was born in New York City and, aside from a brief stint in Los Angeles, grew up in the New York metropolitan area. He is a graduate of Vassar College, where he majored in English. He lives with his family in Connecticut, where he is currently at work on another John March novel.

Everything is Red
Joanna Chmielewska