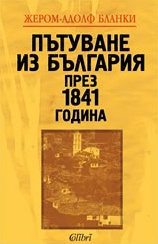 After the crush of the Niš (Nish) rebellion in 1841 Jérôme-Adolphe Blanqui was sent from French government to Bulgaria to reflect the events. After that he has wrote "Travels in Bulgaria, 1841" – a political travel notes, in which describes too hard situation of Christian population of the Balkans during the time of the disintegrating Ottoman Empire. In it Blanqui speaks with particular sympathy for Bulgarians, their manners and customs.

Jérôme-Adolphe Blanqui (November 21, 1798, Nice - January 28, 1854, Paris) was a French economist. He began his career as an instructor, giving his time to chemistry and other sciences allied to medicine, acting as assistant professor of the humanities in a famous school, L'Institution Massin. Later on Blanqui stood in the foremost rank among the economists of his day. He advocated principles of commercial freedom. As a writer, he was noted for research, lucidity, occasional sallies of wit, frequent passages of great brilliancy, and at times a sustained eloquence of diction.

His major work is "History of Political Economy in Europe" (1838), he also wrote "Résumé de l'histoire du commerce et de l'industrie" (1826), "Précis élémentaire d'économie politique"(1826), "De la situation économique et morale de l'Espagne" (1846) and "Les classes ouvrières en France" (1848). Besides a great number of journalistic articles, Blanqui published: "Travels in England and Scotland" (1824); "Journey to Madrid" (1826); "A Series of Reports on the Products of French Industry in 1827" (1827); "The English Minister Huskisson", and his "Economic Reform"; "Report on the Economic and Moral Condition of Corsica" (1838); "Report on the Economic Condition of the French Possessions in Algeria" (1840); "Travels in Bulgaria" (1841); "Considerations on the Social Condition of Europoean Turkey" (1841); "Report on the World's Fair in London" (1850); and the "Life and Labors of Jean Baptiste Say". In addition a series of interesting letters between Blanqui and M. Emile de Girardin, in which free trade and protection were discussed, appeared in 1846 and 1847.