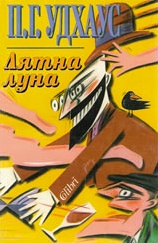 An Englishman's home may be his castle, but to Sir Buckstone Abbott Walsingford Hall was nothing but a blot on the landscape. With its glazed red bricks, its dome and minarets, it was so jarred upon his sensitive soul that it was his avowed intention to unload the unsightly pile on the first prospective buyer. He took the chance when the Princess von und zu Dwornitzchek began toying with the idea of purchasing it. It was therefore extremely unfortunate that, at the psychological moment, America's Number One process server should arrive at the Hall to serve breach of promise papers on the Princess's younger stepson. Even more unfortunate was it that it was Sir Buckstone's secretary, Prudence, who was bringing the suit. Finally, misfortune became disaster when the Princess's elder stepson, and pet aversion, arrived on the scene and took it upon himself to slander so heartily Adrian Peake, a young man torn between the rival claims of Jane Abbott's youthful charm and the Princess's gleaming millions. This is a novel in the traditional Wodehouse manner, a story of hilariously complex situations that will reduce the reader to tears of delight.

The Luck of the Bodkins
P. G. Wodehouse