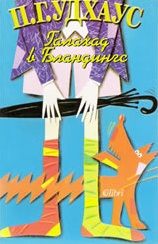 For the greater part of each year Blandings Castle, ancestral home of the Earls of Emsworth is accustomed to drowse the hours away in comfortable somnolence. Presided over above-stairs by the Ninth Earl himself, below-stairs by Beach the butler, and in the piggeries by that most celebrated of all sows, the Empress of Blandings, serenity and calm are the unvarying order of the day. The moments of exception occur when Gaily is around. The Hon. Galahad Threepwood is an infrequent visitor at the Castle, but when he does grace those ancient stones with his presence the effect is both disrupting and electrifying. In his youth, Gaily was one of the notable figures of the London scene - the man to whom the world of the stage, fashionable racecourses, and the rowdier restaurants pointed with conscious pride. Now, silver-haired but as gaily debonair as ever, the mingled whiff of paddock and bar-room as much a part of his personality as the beribboned monocle he wears in his eye, he shoulders the problems of his kinsmen and friends with a benign and confident omniscience. A pretty girl in distress, the mending of sundered hearts, the introduction of im-posters into his brother's demesne, all come alike to Gaily. His nimble brain finds the solution to every predicament. Admittedly, one or two of his schemes go awry en route, but such set-backs he takes cheerfully in his stride like the master-tactician j hat he is. This is a splendid piece of Wodehouse foolery; one of the sunniest and funniest books for years.