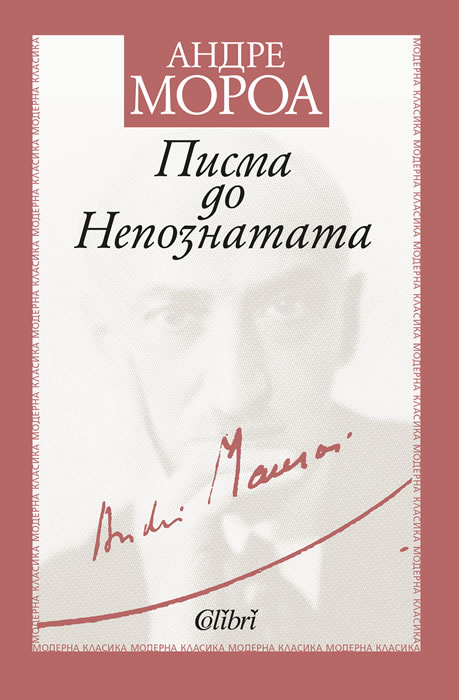 To an Unknown Lady

"To an Unknown Lady" is an epistolary work, unreleased in Bulgaria so far. It is different from the other works by the author, mostly because of its intimate tone, sincerity and the deep feeling that gives it uniqueness. The writer addresses all the women who are personified through the beautiful Unknown, and answers the questions they might ask: about love, coquetry, moral and intellectual improvement, about relationships with men, children and family, about the pleasures of spirit and body. Thematically circumscribed by a series of letters, this variegated array of subjects is ostensibly geared to prepare the prospective spouse for a successful marriage.

André Maurois, born Emile Salomon Wilhelm Herzog, was a French author. André Maurois was a pseudonym that became his legal name in 1947. André Maurois is very famous writer in Russia. Many of his books are translated to Russian. During World War I he joined the French army and served as an interpreter and later a liaison officer to the British army.

His first novel, Les silences du colonel Bramble, was a witty but socially realistic account of that experience. It was an immediate success in France. It was translated and also became popular in the United Kingdom and other English-speaking countries as The Silence of Colonel Bramble. Many of his other works have also been translated into English (mainly by Hamish Miles (1894–1937)), as they often dealt with British people or topics, such as his biographies of Disraeli, Byron, and Shelley.

During 1938 Maurois was elected to the prestigious Académie française. During World War II he served in the French army and the Free French Forces. He died during 1967 after a long career as an author of novels, biographies, histories, children's books and science fiction stories.