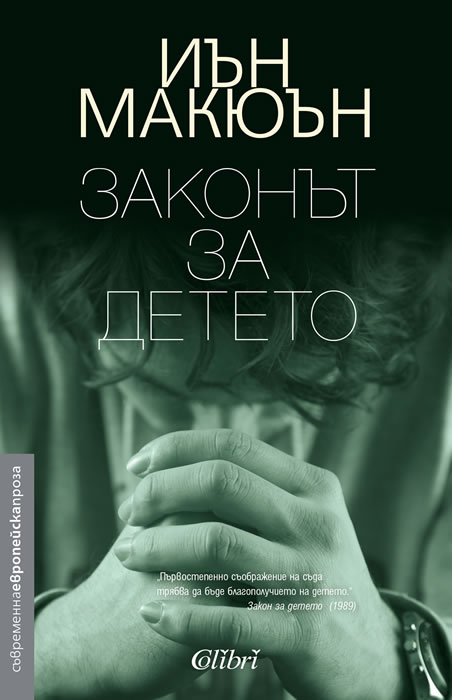 Fiona Maye is a High Court judge in London presiding over cases in family court. She is fiercely intelligent, well respected, and deeply immersed in the nuances of her particular field of law. Often the outcome of a case seems simple from the outside, the course of action to ensure a child's welfare obvious. But the law requires more rigor than mere pragmatism, and Fiona is expert in considering the sensitivities of culture and religion when handing down her verdicts.

But Fiona's professional success belies domestic strife. Her husband, Jack, asks her to consider an open marriage and, after an argument, moves out of their house. His departure leaves her adrift, wondering whether it was not love she had lost so much as a modern form of respectability; whether it was not contempt and ostracism she really fears. She decides to throw herself into her work, especially a complex case involving a seventeen-year-old boy whose parents will not permit a lifesaving blood transfusion because it conflicts with their beliefs as Jehovah's Witnesses. But Jack doesn't leave her thoughts, and the pressure to resolve the case - as well as her crumbling marriage - tests Fiona in ways that will keep readers thoroughly enthralled until the last stunning page.

McEwan was born in Aldershot in England and spent much of his childhood in the East Asia, Germany and North Africa where his father, an officer in the army, was posted. He was educated at the University of Sussex and the University of East Anglia, where he was the first graduate of Malcolm Bradbury's pioneering creative writing course.

McEwan's works have earned him worldwide critical acclaim. Among the many litarary prizes are the Somerset Maugham Award in 1976 for his first collection of short stories "First Love, Last Rites"; Whitbread Novel Award (1987) and Prix Fémina Etranger (1993) for "The Child in Time"; and Germany's Shakespeare Prize in 1999. He has been shortlisted for the Booker Prize for Fiction three times, winning the award for "Amsterdam" in 1998. His novel "Atonement" received the WH Smith Literary Award (2002), National Book Critics' Circle Fiction Award (2003), Los Angeles Times Prize for Fiction (2003), and the Santiago Prize for the "European Novel" (2004). He is also a Fellow of the Royal Society of Literature, a Fellow of the Royal Society of Arts, and a Fellow of the American Academy of Arts and Sciences.

The 1997 novel “Enduring Love”, investigating the unsettling relationship between a science journalist and an obsessive stalker, made McEwan a pioneer setting the golden standard for the so-called neuronovel. “Atonement” (2001), turned quickly into an Oscar-winning movie, made him a global celebrity. Both commercially and critically acclaimed, Ian McEwan just won the Jerusalem Prize for the Freedom of the Individual in Society, a prize that validates him once again as a contemporary humanist, whose work still challenges the limits of our senses and sensibilities in this forever changing world.