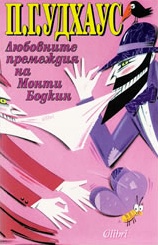 Monty Bodkin's year in Hollywood is completed and he has returned to London, leaving his secretary Sandy Miller heartbroken, her love unmentioned, unrequited. Monty's desires lie elsewhere - with the English hockey international Gertrude Butterwick, to be precise. Butterwick is horrified at Monty's return, Ivor Llewellyn breathes a huge sigh of relief, and the Drones Club pricks up its ears.

Attentive students of the Wodehouse canon will recall that Mr Butterwick made it a condition of Monty's betrothal to Gertrude that Monty would hold down a job for a year, which more or less sank any chance of the liaison coming to a fruition; but Monty succeeded in blackmailing Mr Llewellyn into giving him a job.

Now, with the conditions plainly satisfied, Monty confronts Mi Butterwick to claim the hand of Gertrude, his return to London should, he feels, be in the style of a Roman triumph. But Hell has no fury like a flummoxed Butterwick, and the Bodkin road to happiness is arduous and pitfalled through and through.