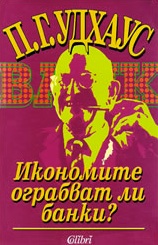 Situated as it was in a prosperous county town, Bond's Bank had long enjoyed the respectful confidence of its clients. But when Mike inherited the Bank from his late uncle, Sir Hugo, he was shocked to find that, thanks to the prodigal benevolence of his predecessor, the Bank was many thousands short in the kitty. Time was needed to make up the defalcations, but, as ill luck would have it, the Bank Examiners were due immediately to go over the Bank's books. The prospect of gaol loomed large. "Unless", said Mike desperately, "some kindly burglar takes it into his head to burgle the bank before the Examiners arrive, I'm for it." It was with no such altruistic thought that, coincidentally, Horace the gentlemanly gangster, had indeed planned such an enterprise, but strictly for the benefit of himself and his deserving colleagues, Ferdie the Fly, and Basher, the safe expert. To further his plans, Horace took a job as butler to the Bond residence where, inspired by her superlative cooking, he fell in love with Ada, Mike's secretary; and as with other ardent lovers before him, the pure flame of love changed his motives—if not his intentions. And all might have been well, but for the well-meant endeavours of Jill, Mike's sprightly fiancee, the intervention of Charlie the Chicago gangster and the suspicions of Potter, the hard-faced man from Scotland Yard. All these events, and what eventually fell out, are faithfully chronicled in this highly diverting novel by the inimitable P. G. Wodehouse.