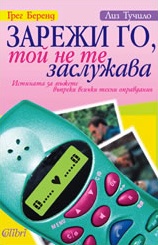 He's Just not That into You

The No-Excuses Truth to Understanding Guys By Greg Behrendt and Liz Tuccill, former "Sex and the City" writers.

It is the classical script for a lonely woman: you like him but he doesn't call, doesn't suggest dating, doesn't sleep with you but with other women, hides from you when sober. And you're looking for the reasons: he's been busy, he's affraid of commitments... Learn the 16 lessons - funny and useful at the same time, learn the truth about the "strong" gender. Behrendt and Tuccill know all the men's excuses and now offer a simple and logical answer: he's just not that into you. Stop drowning into delusions and excuses. Don't stay at home waiting for his call, just go out and find another guy.

Greg Behrendt is a stand-up comedian. He was a consultant for the popular television show "Sex and the City". Behrendt co-wrote the New York Times best-sellers "He's Just Not That Into You" and "It's Called a Breakup Because It's Broken". He has appeared regularly on "The Tonight Show" and "Late Night with Conan O'Brien". His stand up special, "Greg Behrendt is Uncool", debuted on Comedy Central in January of 2006.