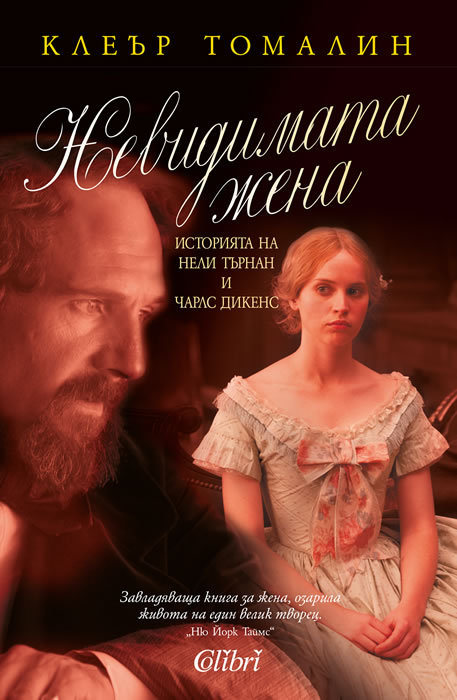 When Charles Dickens and Nelly Ternan met in 1857, she was 18: a professional actress performing in his production of The Frozen Deep. He was 45: a literary legend, a national treasure, married with ten children. This meeting sparked a love affair that lasted over a decade, destroying Dickens's marriage and ending with Nelly's near-disappearance from the public record. In this remarkable work of biography, Claire Tomalin rescues Nelly from obscurity, not only returning the neglected actress to her rightful place in history, but also giving us a compelling and truthful account of the great Victorian novelist. Through Dickens's diaries, correspondence, address books, and photographs, Tomalin is able to reconstruct the relationship between Charles and Nelly, bringing it to vivid life. The result is a riveting literary detective story — and a portrait of a singular woman.

The film based on the book is directed by Ralph Fiennes, co-starring Fiennes and Felicity Jones with Michelle Fairley, Kristin Scott Thomas, and Tom Hollander.

Born Claire Delavenay in London, she was educated at Newnham College, Cambridge. She became literary editor of the 'New Statesman' and also the 'Sunday Times'. She has written several noted biographies and her work has been recognised with the award of the 1990 James Tait Black Memorial Prize and the 1991 Hawthornden Prize for 'The Invisible Woman The Story of Nelly Ternan and Charles Dickens'.

She married her first husband, Nicholas Tomalin, who was a prominent journalist but who was killed in the Arab-Israeli Yom Kippur War in 1973. Her second husband is the novelist and playwright Michael Frayn.

She is Vice-President of the Royal Society of Literature and of the English PEN (International PEN).