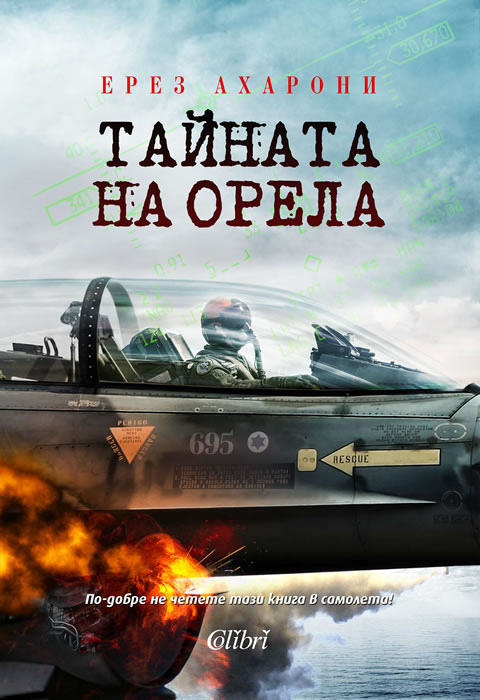 Ido Barnea, an Israeli combat pilot, is flying a routine night flight over the Negev desert when suddenly his reliable Skyhawk jet fighter starts to vibrate uncontrollably and finally crashes, forcing Ido to eject at the last possible second. At that exact moment, in the heart of Brussels, a young girl is kidnapped. What is the connection between those two incidents? Who is behind them?

Accused of betrayal, Ido is forced into a fast-paced dizzying chase in order to clear his name. Naama Sharon, a beautiful Mossad agent is sent after him, and the two encounter powerful arms dealers, cynical terrorists and corrupt army officers. In their struggle, they discover that the two mysterious incidents hide a deplorable crime. The Eagle's Secret is an original, thrilling novel, full of jet-fighter-like twists and turns. Its fast pace will leave you breathless... yet wishing for more.

Erez Aharoni grew up in Ramat Gan, Israel. As a child, he led in the boy scouts and played sports. He was drafted to the Israel Air Force, and completed his fighter pilot training course in 1978.

Later on, he served as a pilot in the Hercules squadron, and participated in various flights and missions, including the immigration of the Jews of Ethiopia. After his discharge, he studied Law, finishing his degree at Tel Aviv University.

Mr. Erez Aharoni is one of Israel's foremost commercial lawyers and one of the founders and managing partner of the international law firm of Zysman, Aharoni, Gayer & Co. Mr. Aharoni is also a partner and an owner of the U.S. law firm ZAG/S&W and of the chinese law firm ZAG/JunZeJun.

His love of writing and fiction began at a young age. In 2004, his story "Cackling (The Sounds of the Duck)" won first prize in the Uriel Ofek Short Fiction competition. In 2006, his first book, "Half a Moustache", was published by Maariv, and three years later, his novel "The Eagle's Secret" was published by Kinneret Zmora-Bitan.

In 2011, his newest book, "Wildfire", edited by Amnon Jackont, was published by Kinneret Zmora-Bitan.