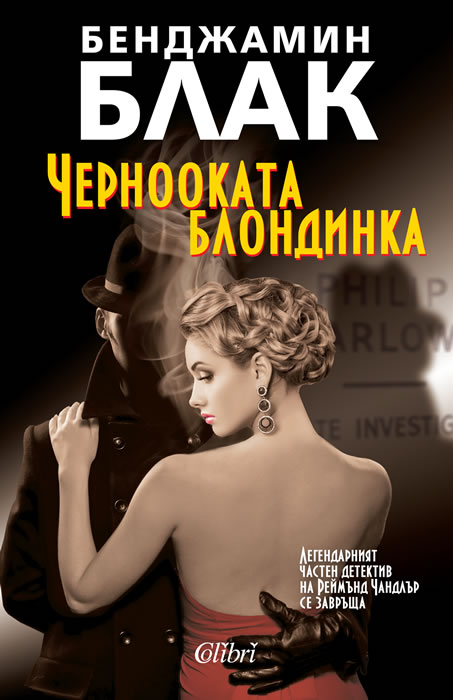 "It was one of those summer Tuesday afternoons when you begin to wonder if the earth has stopped revolving. The telephone on my desk had the look of something that knows it's being watched. Traffic trickled by in the street below, and there were a few pedestrians, too, men in hats going nowhere."

So begins The Black-Eyed Blonde, a new novel featuring Philip Marlowe - yes, that Philip Marlowe. Channeling Raymond Chandler, Benjamin Black has brought Marlowe back to life for a new adventure on the mean streets of Bay City, California. It is the early 1950s, Marlowe is as restless and lonely as ever, and business is a little slow. Then a new client is shown in: young, beautiful, and expensively dressed, she wants Marlowe to find her former lover, a man named Nico Peterson. Marlowe sets off on his search, but almost immediately discovers that Peterson's disappearance is merely the first in a series of bewildering events. Soon he is tangling with one of Bay City's richest families and developing a singular appreciation for how far they will go to protect their fortune.

Only Benjamin Black, a modern master of the genre, could write a new Philip Marlowe detective novel that has all the panache and charm of the originals while delivering a story that is as sharp and fresh as today's best crime fiction.

Banville was born in Wexford, Ireland. His father worked in a garage and died when Banville was in his early thirties; his mother was a housewife. He is the youngest of three siblings; his older brother Vincent is also a novelist and has written under the name Vincent Lawrence as well as his own. His sister Vonnie Banville-Evans has written both a children's novel and a reminiscence of growing up in Wexford.

Educated at a Christian Brothers' school and at St Peter's College in Wexford. Despite having intended to be a painter and an architect he did not attend university. Banville has described this as "A great mistake. I should have gone. I regret not taking that four years of getting drunk and falling in love. But I wanted to get away from my family. I wanted to be free." After school he worked as a clerk at Aer Lingus which allowed him to travel at deeply-discounted rates. He took advantage of this to travel in Greece and Italy. He lived in the United States during 1968 and 1969. On his return to Ireland he became a sub-editor at the Irish Press, rising eventually to the position of chief sub-editor. His first book, Long Lankin, was published in 1970.

After the Irish Press collapsed in 1995, he became a sub-editor at the Irish Times. He was appointed literary editor in 1998. The Irish Times, too, suffered severe financial problems, and Banville was offered the choice of taking a redundancy package or working as a features department sub-editor. He left. Banville has been a regular contributor to The New York Review of Books since 1990. In 1984, he was elected to Aosdána, but resigned in 2001, so that some other artist might be allowed to receive the cnuas.

Banville also writes under the pen name Benjamin Black. His first novel under this pen name was Christine Falls, which was followed by The Silver Swan in 2007. Banville has two adult sons with his wife, the American textile artist Janet Dunham. They met during his visit to San Francisco in 1968 where she was a student at the University of California, Berkeley. Dunham described him during the writing process as being like "a murderer who's just come back from a particularly bloody killing". Banville has two daughters from his relationship with Patricia Quinn, former head of the Arts Council of Ireland.