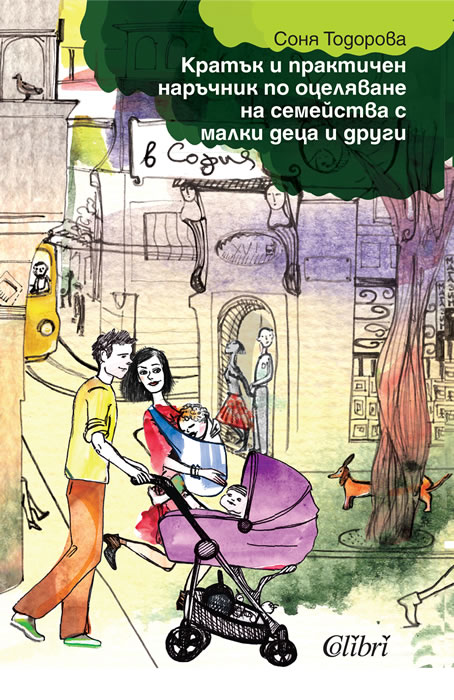 "It's a book about Sofia and something else, written in the spirit of "Michelin" guides, catchy descriptions of Terry Pratchett, and charming chaos of home shopping lists. Here you will find laughter, pragmatism and various stories combined with the slight insanity that motherhood bears on its wings, with attempts to live, not only to survive in an urban environment, and with the effort to preserve the Beauty within the confused life of the grown-ups, which deserves admiration. The author has managed to grab the small moments that seem boring or are invisible for ordinary people, let them go through the sieve of her artistically squint worldview and serve them to us with the necessary skill, well cooked and properly seasoned."
Konstantin Rusev-Shaman
Categories
Contemporary FictionContemporary Bulgarian Fiction
About the Author

Sonya Todorova was born in 1979 in Sofia, Bulgaria. She studied in a German language school and graduated from the University of Architecture, Civil Engineering and Geodesy in Sofia. After five years of academic research at the Vienna University of Technology, she was awarded a doctoral degree in Advanced Geodesy. All along, Sonya Todorova enjoyed writing short stories. Since 2010, she has been working as a freelance translator and is a contributing writer for the Bulgarian magazine “Jenata Dnes” (“The Woman of Today”).

Her first book, “A Concise and Practical Guide to Survival for Families with Small Children and Others in Sofia” (Colibri, 2015), is a humorous, yet sharp social study of present-day life in her hometown and was nominated for the Outstanding Cultural Achievement Award of Sofia Municipality. Her debut novel, “Adi Landau’s Pearls”, was published in March, 2016. It was nominated for the 2016 “Helikon” Book Award for New Bulgarian Prose and shortlisted for the 2016 “Peroto” Award for Contribution to the Bulgarian Literary Context.

The stories in her latest book, "The Unknown Human Images", lead the readers through the reality of everyday life while playing a sly game with their expectations.