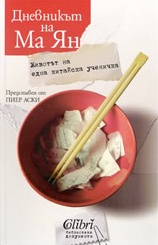 The Diary of Ma Yan

The daughter of poor peasants from an extremely remote village in the northwestern region of Ningxia – thirteen-year-old Ma Yan, just understood that her parents have no money for her education. In her despair Ma Yan wrote a letter to her mother who was illiterate and that was why the mother gave the letter and the diary of her daughter to a French journalists who were at that moment in the village. One of these journalists was Pierre Haski who edited and published the Ma Yan's diary under the title: "The Diary of Ma Yan: The Struggles and Hopes of a Chinese School Girl". The diary has been issued in seventeen languages and sold over 200,000 copies worldwide.

Pierre Haski (1954) is a French journalist, co-founder of the website “Rue 89” and former deputy editor of “Libération”. During his career he went on a number of international assignments, corresponding from South Africa (1976-1980), Jerusalem (1993-1995) and China (200-2005). In China Haski has found the diary of a schoolgirl, which he edited and published as “The Diary of Ma Yan: The Struggles and Hopes of a Chinese School Girl”.