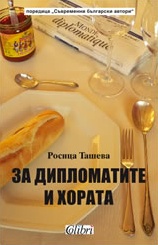 Of Diplomats and Men

In this book with a title borrowed from both Shakespeare and Steinbeck the reader meets the officials of the Bulgarian Embassy in Paris at the time of the great political changes in Eastern Europe which gave birth to democracy and many absurdities. From the ambassador himself down to the counsellors, the attaches, second assistants and the cook, all have been portrayed and, as Rositsa Tasheva says, if someone has been ignored by chance, he should consider himself lucky. The truly ridiculous situations in which the characters appear, the funny stories told with an elegant sense of humour and an indulgent smile align the book among the best examples of comic writing.

They call the author the Bulgarian Woodehouse and compare her also with Jerome K. Jerome and Pierre Daninos, while “Of Diplomats and Men” is labelled as “the funniest text written in Bulgarian”. Her book received immediate praise and acknowledgement and has been reissued several times.

The Bulgarian writer Rositsa Tasheva has three books to her credit and they have already established her as one of the most talented humorists in the country. She was born in Sofia, where she graduated from an English Language High School and then – from the French Philology Department at Sofia University. She has been on the staff of the “Sofia Press” Agency, the French Embassy in Sofia and the Bulgarian Embassy in Paris. Presently she is working as an editor at the Colibri publishing house.

After her experience in Paris she wrote the book “Of Diplomats and Men” (1998) in which the life of Bulgarian diplomats during the first years of democracy is described with a subtle sense of humour. Actually diplomats from many countries have recognized their mirror-images in it. Her next book – “Domestic Apocalypse” (2000) – is a story about the everyday life of a typical and also untypical, but definitely weird family. The book enjoyed enormous success and raised many sincere laughs from readers who have shared the same silly scenes and situations of domestic apocalypse. The novel “As for the Highlander” (2010) describes with a smile and sympathy one year in the life of a painter suffering from a lifelong crisis – looser with a heart of gold and a knack for easy living.

Rositsa Tasheva is one of the best Bulgarian translators from the French. More than 50 books of Balzac, Maupassant, Flaubert, Céline, Albert Cohen, San Antonio, Jean Jeunet, Kundera, Cioran and many others have appeared under her translating pen. She has been given The Prize of the Union of Translators in Bulgaria three times – in 1985, 1996 and 2006.