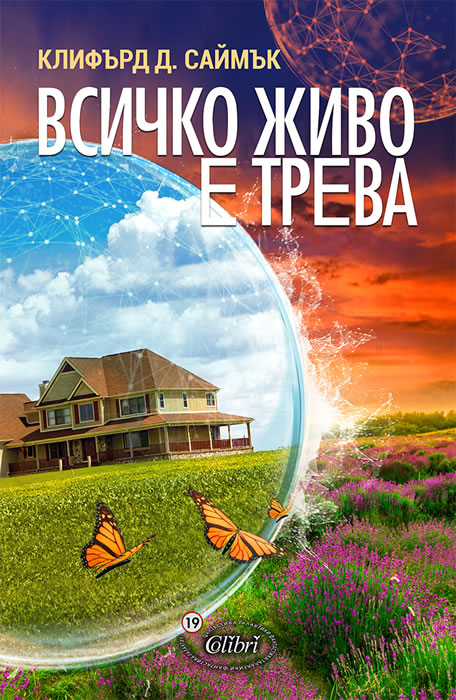 All flesh is grass

A mysterious invisible barrier suddenly encloses a small, out-of-the-way American town. It's been put there by a galactic intelligence intent on imposing harmony and cooperation on the different peoples of the universe. But to the inhabitants, the barrier evokes stark terror.

Clifford Donald Simak (August 3, 1904 – April 25, 1988) was an American science fiction writer. He was honored by fans with three Hugo Awards and by colleagues with one Nebula Award.The Science Fiction Writers of America made him its third SFWA Grand Master and the Horror Writers Association made him one of three inaugural winners of the Bram Stoker Award for Lifetime Achievement.

Simak himself sums up his life's work in the Foreword to Skirmish. After explaining what themes he avoids (no large-scale alien invasions, no space wars, no empire sagas), he states, "Overall, I have written in a quiet manner; there is little violence in my work. My focus has been on people, not on events. More often than not I have struck a hopeful note... I have, on occasions, tried to speak out for decency and compassion, for understanding, not only in the human, but in the cosmic sense. I have tried at times to place humans in perspective against the vastness of universal time and space. I have been concerned where we, as a race, may be going, and what may be our purpose in the universal scheme — if we have a purpose. In general, I believe we do, and perhaps an important one."