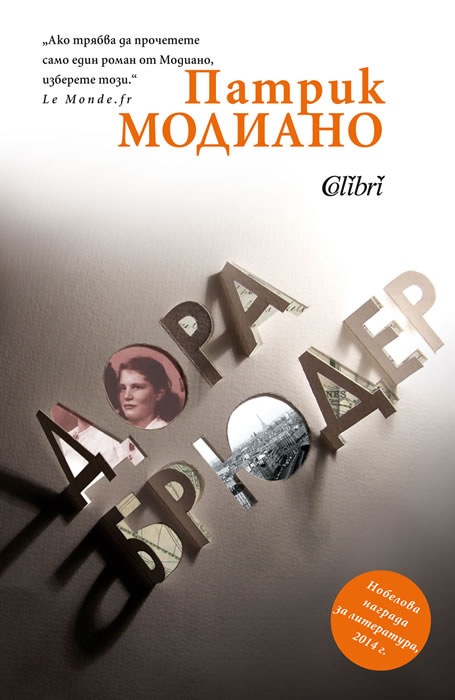 Patrick Modiano opens Dora Bruder by telling how in 1988 he stumbled across an ad in the personal columns of the New Year's Eve 1941 edition of Paris Soir. Placed by the parents of a 15-year-old Jewish girl, Dora Bruder, who had run away from her Catholic boarding school, the ad sets Modiano off on a quest to find out everything he can about Dora and why, at the height of German reprisals, she ran away on a bitterly cold day from the people hiding her. He finds only one other official mention of her name on a list of Jews deported from Paris to Auschwitz in September 1942.

With no knowledge of Dora Bruder aside from these two records, Modiano continues to dig for fragments from Dora's past. What little he discovers in official records and through remaining family members, becomes a meditation on the immense losses of the peroid—lost people, lost stories, and lost history. Modiano delivers a moving account of the ten-year investigation that took him back to the sights and sounds of Paris under the Nazi Occupation and the paranoia of the Pétain regime as he tries to find connections to Dora. In his efforts to exhume her from the past, Modiano realizes that he must come to terms with the specters of his own troubled adolescence. The result, a montage of creative and historical material, is Modiano's personal rumination on loss, both memoir and memorial.

Patrick Modiano is a French-language author and playwright and winner of the 2014 Nobel Prize in Literature. He is a winner of the 1972 Grand prix du roman de l'Académie française, and the 1978 Prix Goncourt for his novel "Rue des boutiques obscures".

Modiano's parents met in occupied Paris during World War II and began a clandestine relationship. Modiano's childhood took place in a unique atmosphere: with an absent father - of which he heard troubled stories of dealings with the Vichy regime - and a Flemish-actress mother who frequently toured. His younger brother's sudden death also greatly influenced his writings.

While he was at Henri-IV lycee, he took geometry lessons from writer Raymond Queneau, who was a friend of Modiano's mother. He entered the Sorbonne, but did not complete his studies. Queneau, the author of "Zazie dans le métro", introduced Modiano to the literary world via a cocktail party given by publishing house Éditions Gallimard.

Modiano published his first novel, "La Place de l’Étoile", with Gallimard in 1968, after having read the manuscript to Raymond Queneau. Starting that year, he did nothing but write.