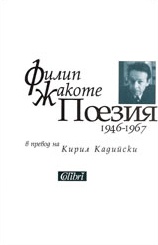 „Philippe Jaccottet is not a poet of the dramatic conflicts and changes, nor of the abysms and hopeless bifurcation. His talent is to fascinate us with his humility, to make us sympathetic to the experiment, to show us the impulse which raises up the things around us...”
Jean-Pierre Richard

Philippe Jaccottet (born in Moudon, Switzerland, on June 30, 1925) is a poet and translator who publishes in French.

After completing his studies in Lausanne, he lived several years in Paris. In 1953, moved to Grignan. He translated into French Goethe, Hölderlin, Leopardi, Musil, Rilke, Ungaretti as well as Homer's Odyssey.