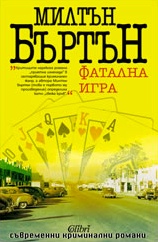 The protagonist is a stranger who comes to town in this gripping country noir set in post-WWII Texas. He arrives in a small town with a nice car and with an even nicer blonde woman. He has a passion for poker and a focused eye on the high-stakes game played at the legendary Weilbach Hotel. He also has an occasional rendezvous with Chicken Little, who seems to be a small-time hustler but may also have a link to whatever our nameless narrator did during the war. The stranger's attention centers on Clifton Robillard, the local banker who owns or runs everything in town--legal or illegal--that turns a profit. The narrator reveals his plan in small doses. Does he simply want to rob Robillard at poker? Or the blonde with hime is willing to drqag him into a fraud petrol business? Or maybe the stranger has a nobler motive than financial gain? Readers will eventually learn the truth, and the truth will set them free in a conclusion that is exhilarating and extraordinarily satisfying. This is a stunningly mature, layered first novel from an author who knows Texas and people in equally fine measure.

Milton Burton was born in Jacksonville, Cherokee County, Texas, on July 23, 1947, a descendent of a long line of Southerners who were yoeman farmers, teachers and small shopkeepers.

Over the years since college he has taught, been a cattleman, and served as a legislative aid for the Texas House of Representatives where he ran a district office for Bill Hollowell of Grand Saline, who at that time was the senior member of the House. At book signings he’s always asked who his favorite writers are, and he must admit that he do not read much crime literature, largely because he doesn’t want to be influenced by anybody.